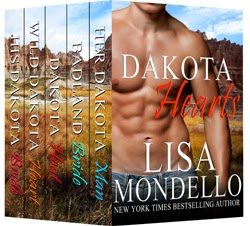 Five stories of the McKinnon brothers of South Dakota.

HER DAKOTA MAN, book 1
Single dad, Logan McKinnon, had seen more than his share of bad times after the death of his wife a year ago. The last thing he needs is Poppy Ericksen, an old flame and his late wife’s best friend, showing up unannounced to help after devastating floods nearly washed away their hometown.

Poppy Ericksen had spent the year wondering how all their lives might have been different after hearing the deathbed confession of her childhood friend. She’d left South Dakota years ago because she couldn’t bear to watch the man she loved loving another woman. But now she knows the truth. She’ll keep the promise she made to a friend, but will Logan understand when he learns the truth?

BADLAND BRIDE book 2
Raised an Army brat, Regis Simpson was used to calling new towns home, learning to quickly make friends but never letting anyone get too close. When devastating floods tear through the Badlands of South Dakota, she thinks Rudolph is just another town that needs to be rebuilt. She never counted on the sexy town doctor, Keith “Hawk” McKinnon or his determination to break down walls she’d spent a lifetime building, making it impossible for her to leave.

DAKOTA HEAT book 3
Hotshot Sam McKinnon was always leaving town, chasing another fire until his own hometown became vulnerable during the fire season after a big flood left debris and devastation in its path. He didn't expect out of town dispatcher, Summer Bigelow, to catch his eye or his heart.

It wasn't Summer's idea to move from Providence to South Dakota. But when a serial murderer suddenly turns his attention on Summer, her boss insists she leave town. She's dealt with high tension, life or death situations many times in her job. It isn’t until she meets Sam McKinnon and falls for the sexy hotshot that she really begins to know fear. The fear of losing someone she loves.

WILD DAKOTA HEART book 4
Former NAVY SEAL, Ethan McKinnon, has spent ten years trying to wash away the bad boy reputation that resulted in the death of his best friend Denny Newton. Unfortunately, that meant leaving behind everyone, especially Maddie Newton, Denny’s sweet younger sister. Ethan had faced sniper bullets and lived through black ops missions that he never should have come home from. But facing Maddie again is the most terrifying thing he’s ever had to do.

There was a time when Maddie Newton’s sun rose and set with Ethan McKinnon. Now that Ethan is back in Rudolph, he insists they work together to fulfill Denny’s dream of restoring the motorcycle and bringing it to Sturgis. But how can Maddie work alongside Ethan when he’s the last man on earth she wants to be near…and the only man she’s ever truly loved?

HIS DAKOTA BRIDE book 5
When Skylar Barnett came to South Dakota, she thought her life was just beginning. Newly pregnant, she waited for the love of her life, Wade McKinnon, to join her so they could start their life together. But her joy quickly shattered when she'd learned Wade was dead. For the sake of their son, Skylar married...and divorced, a man she didn't love so her baby would have a father. But marrying the wrong man when her heart belonged to Wade was the biggest mistake of her life. Now Wade is back and determined to get her back. But with so much that happened while he was gone, how can they recapture the love Skylar buried while in the arms of another man when she thought he'd died?

SIGN UP FOR MY NEWSLETTER FOR A CHANCE TO WIN A FREE E-READER!

When you sign up for my newsletter, you’ll get updates on events and book releases, be invited to special giveaways, and a whole lot more! I’ll never sell or share your name or email address. You can change your mind at any time by clicking the unsubscribe link in the footer of any email you receive from me.

I need to confirm your email address.

To complete the subscription process, please click the link in the email I just sent you.